6 Myths About Hurricane Preparations & What You Should Do Instead

Coastal states like Florida are hit squarely by massively destructive hurricanes. While we can’t stop Mother Nature completely, we can take the necessary precautions to control certain elements of the storm’s impact.

The problem is, when it comes to preparing for a hurricane, you'll hear tips from just about anyone— friends, family and self-proclaimed hurricane experts. Unfortunately, many of these tidbits of advice are based on untrue hurricane myths or from those who don’t take hurricanes seriously.

Because of these varying suggestions on hurricane preparedness, both new and seasoned homeowners often make dangerous hurricane prep mistakes before, during, and after the storm. Here are a few common hurricane protection myths to look out for, as well as tips from our storm experts on what you should do instead:

Hurricane Prep Myth #1: “Crack open your windows to stabilize pressure during a storm.”

This myth gets tossed around with both hurricanes and tornadoes. When you're in the middle of either, the last thing you want to do is open your window. Opening your windows during a storm lets in wind, water, and flying debris. This can also put you at an incredibly high risk of having your roof torn off!

Your windows will break from the outside before the pressure inside is sufficient enough to do damage on its own. Think of it this way: houses aren't air tight, and there are openings throughout your home that will let out air pressure that builds up inside naturally, without putting you at risk. The best thing you can do during a hurricane is to leave your windows tightly closed.

Hurricane Prep Myth #2: “Tape the glass of your windows to prevent them from shattering.”

Another popular hurricane myth is that taping your windows will prevent them from breaking during a storm. Not only is this incredibly untrue, it can also cause serious injury.

When traditional window glass shatters, it often shatters into little pieces. Windows that are taped may break into larger, more dangerous shards, which can be picked up and tossed around with debris from heavy winds.

The best thing you can do to prevent glass breaking is to invest in impact glass, which is specially designed to withstand strong force. Even if these storm-ready windows do shatter, the treated, tempered glass breaks into small pebble-sized bits without dangerous edges that can cut or damage.

Some other hurricane-safe windows have a layer of adhesive between the two glass panes to secure broken glass. It’s also wise to invest in covering your impact glass with hurricane-proof window treatments like storm shutters for double protection.

Hurricane Prep Myth #3: “A hurricane won’t affect you if you don’t live near the coast.”

While coastal areas do experience much of the damage, they're not the only areas at risk. The effects of a hurricane are also felt far inland. Coastal areas may require rapid response more than inland areas, but even inland locations can experience strong winds, heavy rain, and tornadoes. And they’re also not impervious to the aftermath of a hurricane, such as flooding from overflowing rivers, lakes, and streams.

Never assume you’re safe based on your location in Florida. Watch your area’s weather channel and follow recommendations for hurricane preparedness for your county.

Hurricane Prep Myth #4: “Putting force against a window or door will stop it from breaking.”

This is most definitely a common myth, and it could put you at serious risk! If Mother Nature creates threatening winds, don’t expect her to be gentle just because you are standing in the way.

If the wind is strong enough, the wind could rip off the door or break the window— with or without something in front of it. Simply put, you are more likely to be injured if you try to add force to a door or window.

To reduce the chances of windows and doors breaking, make sure they are designed with tempered glass or hurricane-tested materials. Hurricanes are not the time for DIY storm protection. Hurricane Myth Prep #5: “Evacuation orders are scare-tactics. There's no reason to evacuate until the weather gets bad.”

Evacuation orders are serious orders— given early enough to allow time for people to find safe shelter before the storm hits. Waiting too long to leave can mean that you'll be without an escape route. Even if the weather appears to be calm, storm path forecasts can change rapidly, and waiting until the last minute to evacuate can have negative consequences.

As soon as possible after an evacuation order is announced, gather the items that you need, secure your home and commute to a safe area. When you leave, be sure to bring non-perishable food, water, your identification, prescriptions, and any necessary items to fair a few days away from home.

Hurricane Myth Prep #6: “Here in Florida, we get high winds during summer thunderstorms. A hurricane can't be much worse.”

While Florida's summer thunderstorms can produce wind gusts upward of 60 miles per hour, the winds during a hurricane can be twice as fast or even faster.

Additionally, winds during a hurricane are sustained for hours, which is much longer than a brief summer thunderstorm. Each time the wind speed doubles, the wind it exerts is four times as strong. Even a Category 2 hurricane, which has winds of 96 to 110 miles per hour, can do considerable damage to roof structures and trees.

In short, a hurricane is labeled a hurricane because it’s much worse than a traditional thunderstorm! Preparation for each is completely different.

While hurricane preparedness myths are more common than you might think, these storm mistakes are easily preventable when you understand the true facts.

Prepare the right way by downloading our free Hurricane Guide, which includes tips for securing your Florida home and family before, during, and after the next big storm. 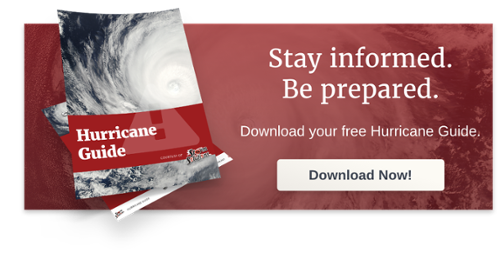